The Story of Stephane – A Triathlete…

The Story of Stephane – A Triathlete…

Coach Stephane has been involved in triathlon racing for over 30 years. He spent 7 years racing pro in Belgium & Australia before turning to age group racing. Below he shares five of his funniest, most dramatic and memorable race experiences.

A big draft legal olympic distance event in Belgium. The front pack of 20 riders were together, before a high speed crash happened. Half the group were taken down, the remaining athletes split up. I got dropped but insisted I wasn’t part of the crash. However, the next day there was a photo of me in the newspaper picking up my bike off the road. I have no memory of it. 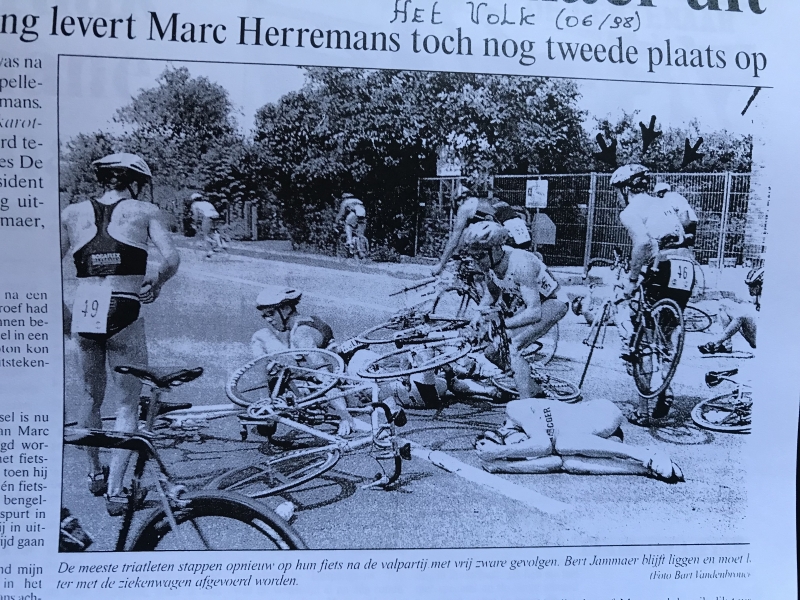 This was a sad race for me as one of my best friends, Craig Morgan, had a bike crash three months before resulting in him becoming a paraplegic. I visited him before I left for the race when he said “Steph, I know I won’t be racing with you in Taupo, but I know you’ll be racing for me”.  This is the only reason why I did not pull out of the race when my bike seat snapped off my bike with 130kms to go. The marathon was painful but nothing compared with his rehab I am sure.

Some up & coming big names were in attendance at this race – Rutger Beke, Bert Jammaer, Axel Zeebroek, Bruno Clerbout, Tom Geudens & Fred Van Lierde. The swim start was chaotic, someone pulled my leg at the start and as a reflex I pulled the leg of the guy in front of me and pulled him under too. Nothing on purpose, just a reflex. Turns out it was a good friend, Johan Rositano. He approached me after the race very angrily and nearly punched me despite trying to convince him it wasn’t on purpose. Our friendship was never the same after as he did not believe me it was an accident.

This was the first draft legal race ever in Belgium. Needless to say that triathletes could not ride in packs back then so it was going to be interesting to say the least. The event was being broad cast live on Belgium television. At 10kms into the bike leg, one of the athletes swerved to avoid a pot hole in the road. His derailleur connected with my front wheel causing a broken spoke. It was a little wobbly but rideable, so I stayed at the back of the bunch. At 20kms on the bike, another athlete swerved this time sending me flying off the side of the road at 45km/hr. The television crew kept filming as I came out of the river with my bike on my shoulder, my helmet side ways and weeds all over me. No one asked me if I was ok so I yelled at the television crew and they took off rapidly after that. I was ok, my ego was bruised and they called me “beek man” or “river man” after this.

Kapelle was only 25kms from my home town and I had trained bloody hard for this race, one of the fittest I have ever been. My dad, Andrew Noble & Tim Bentley travelled into the race together in my dad’s Volvo. Whilst at registration, my dad realised he had locked the keys inside the car. We called my step mum for spare keys but she got lost on the way and we were left without our bikes or any gear. With only 15mins before race start, registration was about to close so we attempted to break into the car using a foot pump to no avail. Volvos were but like tanks & we could not get in. We ended up missing the race with the spare keys arriving only after registration closed.

Diary of a World Championship Triathlete

About the Author: Stephane Vander Bruggen

4x AG World Champion - Stephane originates from Belgium and spent many of his early years racing triathlon there. It is in Belgium through the influence of his parents that he fell in love with the sport. A natural competitor Stephane became a student of the sport always searching for ways to give him an edge over his competition. This constant study and striving for improvement has naturally progressed into a passion for coaching triathlon and it’s individual disciplines.

Open
#GPCWorld or our weekly news. Who is excited about

Open
We had a big crew racing @barwonheadstriathlon tod

Open
Rain, wind or hail the crew is getting it done for

Rain, wind or hail the crew is getting it done for @ironmanoceania Port Mac in May. Well done crew. I made them ride 10x9min team TT following in the car to push, punish & hydrate them 😆 #gpcsquad #nolimits #geelongtriathlon #triathlon #roadtoportmac #imoz #ironman #trainspecific #tritraining #geelongtricoaching #trilife ...